What’s Next For Gold Stocks In March?

Are Gold Stocks Set To Shine This Month?

After ripping lower last month, gold is back on track in March. But that doesn’t mean gold bugs are out of the woods yet. However, something interesting happened on March 4 that we haven’t seen since the start of the year: Big market moves didn’t cause gold to plummet. In fact, for the most part, the price of gold remained static during the midpoint of March’s first week. This could be a telltale sign that fundamental investors aren’t believing the current market hype.

Typically, when there aren’t many financial concerns, we see gold prices decline. Forget gold stocks for a moment. We’re just focusing specifically on the price of gold. A few years back we saw a similar situation with government stimulus packages during President Trump’s early days in office. Gold prices took a back seat to the stock market bull run.

But now we’re seeing some questionable features of the market that could start raising red flags and pointing to safe-havens.

Unless you keep diligent notes every day, you likely forgot about something. That “something” was President Trump’s $1.5 trillion tax cut and $300 billion boost in federal spending. This was put together with the aim of stoking economic growth. Former Fed Chairman Ben Bernanke warned, “The economic effect of President Donald Trump’s $1.5 trillion tax cut and $300 billion bump in federal spending will wear off in two years and then ‘in 2020 Wile E. Coyote is going to go off the cliff.'”

Bernanke warned that the fiscal stimulus came at the wrong time. Essentially, at the time, the economy was already on the rise and the stimulus gave it a shot of adrenaline. The stimulus lifted the real GDP 3.1% in 2018. GDP growth slowed to 2.3% in 2019 while 2020 forecasts show a further slowdown to 1.8%-2.0%.

Meanwhile, the U.S./China trade war may have hampered the overall impact o the stimulus. But still, economists question the true spirit of the package. “There was an acceleration in terms of momentum for business investment, but it was rather short-lived. A year further down the road, we’re really not seeing much of any leftover of this fiscal stimulus package,” said Gregory Daco of Oxford Economics. So here we have potentially slow growth, decreased government earnings thanks to steep tax cuts, and the potential for even more cuts after the 2020 election. All points of interest for gold bulls.

While it’s true that the central bank cut interest rates by half a percentage point. It was the biggest single cut in more than a decade. Supposedly done as a pre-emptive move to protect the economy from the coronavirus, the Federal Reserve is on its heels. But we aren’t talking about the current rate cut. While gold stocks traditionally love low rate environments, let’s look at the last time the Fed slashed rates to a meaningful extent.

Last year when the Fed cut key interest rates for the first time in a decade, gold prices were around $1,450 an ounce. Following the cut, the price of gold declined initially. However, we have seen what has occurred ever since. Basically, when economic confidence grows, consumers spend more and have greater amounts of disposable income. Financial institutions also expect greater returns from loans because in a normal market, rates would rise with economic confidence. In such prosperous times, the attraction of a safe haven investment decreases.

When interest rates decline, economic confidence is usually lower. The economy is traditionally slowing or stagnated. Lower rates are a hope to boost economic spending and as such, there’s usually an underlying problem with the economy to justify such a scenario. This causes a flock to safe-havens like gold. But right now, we have a unique situation. The economy is seemingly its strongest yet, while rates continue to decline. The mismatch in fundamentals has many wondering why. This is one of the reasons why gold prices haven’t dropped even with a “Bullish economy”.

Then we’ve got to take into account bond yields. Similar to gold prices and the broader stock market, there’s no black & white scenario that says if this, then that. But based on history, we can make a few assumptions here as a baseline at the very least. As rates decline, it becomes less of a trade-off for investors to buy investments that hinge on interest-bearing returns. Over the last 10 years, gold prices have shown a stronger negative relationship with real interest rates.

Basically, this positive relationship between gold and bonds can be due to the opportunity costs and capital flow from bonds to gold. When prices of bonds become too high, yields become too low. When bond yields increase, bond prices decrease and traditionally provide a better alternative than gold.

I say traditionally, because a “fear trade” may increase demand for both gold and bonds. This is because what really matters for gold are real interest rates, not nominal yields.

Is The Writing On The Walls Favoring Gold?

Right now we’re seeing massive volatility in the markets both up and down. Meanwhile, the price of gold has remained slow and steady to the upside. While last week was a tough week for everything from stocks to gold, one thing holds true. This is the fact that the same financial situation we were in prior to coronavirus hasn’t changed. Mounting financial threats could be building which includes what was discussed above.

In addition to that, we’re seeing gold and gold stocks continue to climb despite the “record stock market.” But this all could change with the administration’s adjustment to several things. Will that happen? Obviously, only time will tell. But what we do know right now is that gold has historically been a safe-haven sector and stocks have remained in a consistent uptrend even as stocks breakout. 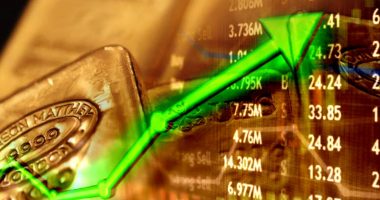